What the Father of Kamala Harris Thinks About Marxism


The father of Kamala Harris is Donald Harris, an immigrant from Jamaica, who taught economics at Stanford University.

He received a Bachelor of Arts degree from London University in 1960. Six years later he received a Doctor of Philosophy degree from the University of California- Berkeley. He retired from Stanford as a professor emeritus of economics in 1998.

He joined the Stanford faculty in 1972 and his focus according to the University was "exploring the analytical conception of the process of capital accumulation and its implications for a theory of growth of the economy, with the aim of providing thereby an explanation of the intrinsic character of growth as a process of uneven development."

In other words, there is nothing to indicate in his Stanford profile that he is a Marxist. The words Marx, Marxist, Marxism are nowhere to be found on his profile.

Indeed, when I first looked at his profile when Kamala was in the primaries, I passed him off as an unimpressive affirmative action hire.

He was a special hire all right but the fact that he is Jamaican was a bonus, there is no question he was viewed as an "alternative economist" Marxist hire.

This was the headline from The Stanford Daily when Harris was offered his post.: 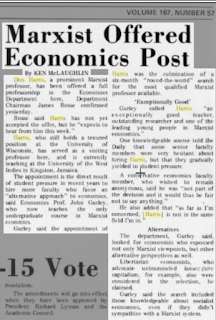 Don Harris, a prominent Marxist Professor, has been offered a full professorship in the Economics Department here, Department Chairman James Rosse confirmed yesterday. Rosse said Harris has not yet accepted the offer, but he "expects to hear from him this week."

The appointment is the direct result of student pressure in recent years to hire more faculty who favor an "alternative approach" to economics, said Economics Prof. John Gurley, who now teaches the only undergraduate course in Marxist economics.

Gurley called Harris "an exceptionally good teacher, outstanding researcher and one of the leading young people in Marxist economics."

One knowledgeable source told the Daily that some senior faculty members were very hesitant hiring Harris, but they gradually yielded tp student pressure.

A conservative economics faculty member, who wished to remain anonymous said he was "not part of the decision and it would not be fair to say anything. "

He also added that "as far as I'm concerned Harris is not in the same field I'm in."

The department, Gurley said, looked for economists who espoused not only Marxists viewpoints, but other alternative perspectives as well.

mple, were considered in the selection, he claimed

Gurley said the search included those knowledgeable about socialist economies even if they didn't sympathize with a Marxist system.


At Stanford, Harris was one of the key faculty members behind a then-new program, "Alternative Approaches to Economic Analysis" as a field of graduate study at Stanford University.

This is what he wrote about Marxism in his book, Capital Accumulation and Income Distribution (my highlights):

Marx was the theorist of economic growth par excellence. He concieved of the capitalist economy as an inherently expansionary system having an inner logic of its own. It was his purpose to discover the abstract and general principles underlying the operation of this form of society and the contradictions it entailed, so as to account for its process of change and supersession. Out of this scientific endeavor, Marx developed an integrated system of analysis with a distinctive method and quite specific formulation of the laws of motion of the capitalist economy. Others, after Marx, have attempted to elaborate upon and develop further this system of analysis, recognizing the changing conditions of capitalism as it develops. Specific elements of Marx's own formulation as concerns, for instance, the law of the falling tendency of the rate of profit and a tendency of the organic composition of capital to rise, are subject to an ongoing debate within the Marxian tradition. The system of analysis is also incomplete in some of its essentials. Nevertheless, the Marxian system remains today as a powerful basis upon which to construct a theory of growth of the capitalist economy appropriate to modern conditions. Accordingly, an attempt is made below (see Chapters 3 and 10) to develop some elements of the Marxian theoretical system that are relevant to this purpose.

And that is how the daddy of Kamala rolls.

Kamala received a Bachelor's degree from Howard University where she double-majored in political science and (ahem) economics and chaired Howard's economics society.