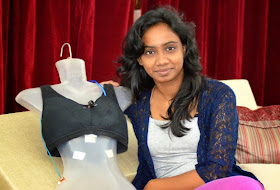 Manisha Mohan, a 22-year-old engineering student in New Dehli, and two of her fellow students have developed a rape-repellent bra that can shock and burn attackers.

It’s called Society Harnessing Equipment, or SHE for short, and here’s how it works: The bra contains a pressure sensor connected to an electric circuit that generates a shock of 3,800 kilovolts, which is severe enough to stun an attacker and severely burn his hand.

“It won’t be enough to immobilize the assailant or potential rapist,” Mohan says, “but that gives enough time for back up.”

The moment its pressure sensors are activated, the bra’s built-in GPS also alerts the police and the victim’s parents to the location where the attack is taking place.

Those who have worn the bra say it’s comfortable. “It is light like any other bra, and one really cannot [tell] a difference,” says a young woman, who asked not to be named.
at 2:59:00 PM
Share