The Islamic State is set to become the only 'state' to back its currency with gold (silver and copper) . ISIS says the new currency will take the group  out of "the oppressors' money system." 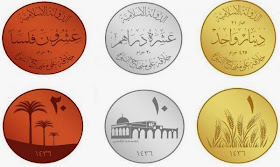 
RW Note: Has ISIS found the achilles heel of US arrogance? I predict this is not going to stop with ISIS. Watch for other countries, perhaps Russia and Iran, move in this direction.

Sanctions and other economic muscling by the US is forcing other countries to seek alternatives to the dollar. It is a cloud hanging over the head of the US dollar as a global reserve currency.