So as things stand at this point:

1. Businesses are not allowed to raise prices

2. They will be required to pay minimum wage workers 30% more.

This should work out real well.

The masses. though, love the mad economic policies of their leader. Below, supporters of Maduro cheer and one holds a picture of Venezuela's late President Hugo Chavez during a May Day rally in Caracas, Venezuela. 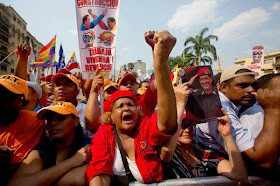 Obviously, not much understanding  from the group above about the ruinous results of price controls and minimum wage laws, as detailed by many economists including Henry Hazlitt in Economics in One Lesson.