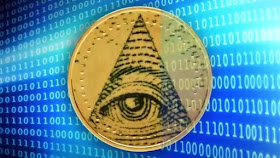 It was titled, "An Update on Digital Currencies."

The update is not good news for privacy advocates who don't want to see all their money transactions tracked by the government.

"[T]he Federal Reserve is active in conducting research and experimentation related to distributed ledger technologies and the potential use cases for digital currencies... As part of this research, central banks are exploring the potential of innovative technologies to offer a digital equivalent of cash," she said.

She went on (my highlight):


We have been conducting in-house experiments for the last few years, through means that include the Board's Technology Lab, which has been building and testing a range of distributed ledger platforms to understand their potential opportunity and risk. This multidisciplinary team, with application developers from the Federal Reserve Banks of Cleveland, Dallas, and New York, supports a policy team at the Board that is studying the implications of digital currencies on the payments ecosystem, monetary policy, financial stability, banking and finance, and consumer protection.

To enhance the Federal Reserve's understanding of digital currencies, the Federal Reserve Bank of Boston is collaborating with researchers at the Massachusetts Institute of Technology in a multiyear effort to build and test a hypothetical digital currency oriented to central bank uses. The research project will explore the use of existing and new technologies as needed. Lessons from this collaboration will be published, and any codebase that is developed through this effort will be offered as open-source software for anyone to use for experimentation...Let me conclude by noting that innovation is central to our work. We remain committed to understanding how technological advances can help the Federal Reserve carry out our core missions, as well as how they are changing the ways that banks, payments, and financial markets operate.

It doesn't appear that a "Fedcoin" will emerge in the near term, say 2021, but it appears they are certainly thinking about introducing one down the road.

There is little doubt that such a digital Fed money will have the capability to track all transactions.

George Orwell didn't even think of such a monster. Remember complete tracking also means the ability of the state to ban above ground purchases of any goods and services it chooses because it would see if such transactions occurred.