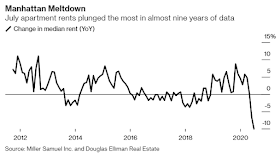 Manhattan apartment rents plunged last month by the most in at least nine years.

July’s vacancy rate climbed to a record of 4.33%, according to a report by appraiser Miller Samuel Inc. and Douglas Elliman Real Estate.

The median rent, with concessions such as free months factored in, plummeted 10% to $3,167. It was the biggest rate of decline in records dating to October 2011.

In Northwest Queens, a waterfront market of high-rises that benefited from its proximity to midtown Manhattan, new leases fell 60%. The median rent tumbled 15% to $2,424.

Of course, the president didn't help with his erratic policy on COVID-19, which is not a serious disease for almost all of working age. He played a major role in fueling the panic with his early Fauci like stance on the virus which provided the numbskulls de Blasio and Cuomo to use the opportunity to take out the blunt central planning authoritarian hammer.

Not to mention, de Blasio allowing the Marxist "destroy and loot the city" riots.