Fed Official Calls for Shutdown of the Entire Economy 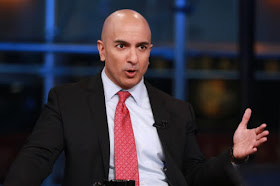 Neel  Kashkari, president of the Minneapolis Federal Reserve Bank, told CBS' "Face the Nation" that the U.S. economy could benefit if the nation were to "lockdown really hard" for four to six weeks to battle COVID-19

How nuts can you get?

Doesn't Kashkari understand that hiding from the virus means hiding until a vaccine is developed---which could be hiding forever? There are plenty of coronaviruses where successful vaccines have never been developed.


If we don't do that [lockdown the country] and we just have this raging virus spreading throughout the country with flare-ups and local lockdowns for the next year or two, which is entirely possible, we're going to see many, many more business bankruptcies.

But a four-to-six weeks lockdown isn't going to do a damn thing. After the lockdown, the virus will flare again.

The only sane thing to do is to open up the entire country, free of all lockdowns, no mask-wearing, warn those who are particularly susceptible to the virus and those who are traumatized by the virus to go into lockdown mode until the rest of the population develops herd immunity.

This is not complicated.

I have always classified  Kashkari as the lead confused monetary policy official within a group of irresponsible money printing quacks.

Now he has expanded his area of bizarre comments. They are no longer limited to monetary policy, which he seemingly doesn't understand at all, to coronavirus science where he has apparently the same inability to think through the many permutations of policy actions.

And this is to say nothing about the many businesses that are on the edge as things and have no chance of surviving another lockdown. Kashkari, of course, thinks the Fed can print money out of thin air and that will solve everything. This thinking is more of Kashkari's inability to think deep. It is production not money printing that grows an economy. Shutting down the entire economy and just printing money is remarkably irresponsible.