The serious nutjobs at the World Economic Forum just overplayed their hand with this insane tweet: 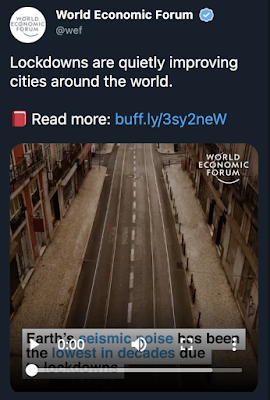 But don't for a minute think this isn't what the globalists really think.

Sky News host Cory Bernardi put it perfectly. The World Economic Forum, he said in a recent broadcast, is the granddaddy of all global organizations.

The WEF is the architect of the great reset and the fourth industrial revolution.

They coined the #buildbackbetter hashtag that is actually proving so popular with big government elites right across the globe and they even predict that by 2030 you'll own nothing and you'll be happy. They call this servitization which is a term and an agenda that looks a lot like servitude to me...

Severtization begs the question if you don't actually own anything who will own what you're renting? Wel,l the answer lies within the WTF premier forum that's at Davos.

Davos is the gathering of global elites including big business CEOs, industry chiefs, government leaders, bureaucrats and multi-billionaires with political agendas. Under the WEF vision the Davos attendees will own what you'll be renting and trust me on this. It's not going to be a philanthropic enterprise.

They'll all be looking to make more money than they currently do and actually to take more control of your life under the guise of equality by reducing you to a mere user rather than an owner. The world does actually become more equal because it will concentrate power authority and money in the hands of a tiny few. All the rest of us become mere economic vassals for these oligarchs.

So make no mistake severtization is just a new name for economic slavery. It's socialism on a global scale.

So now you see how the WEF can view the lockdowns that have destroyed many small businesses, put millions on the dole, caused suicides and mental depression, as "quietly improving cities."

Lockdowns are improving cities for the elitist monsters as they learn what levers to push to gain more power over the populous--and shrink the global population.

I am not kidding.

Here is the video that accompanied the tweet that was taken down.

They see the lockdowns as a positive: