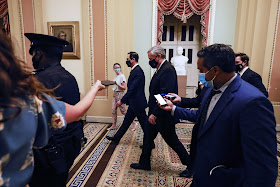 Negotiations over a new coronavirus relief package have failed to yield a deal, White House officials and Democratic leaders said after a last-ditch meeting, reports Politico.

"[Meadows] and I will recommend to the president based upon our lack of activity today to move forward with some executive orders," Mnuchin told reporters.

Of course, there is no money for any of this which would result in the Treasury issuing new debt most of which would be monetized by the Fed, ultimately resulting in upward pressure on prices.