Trump Expands His Commercial Harassment of China Beyond TikTok 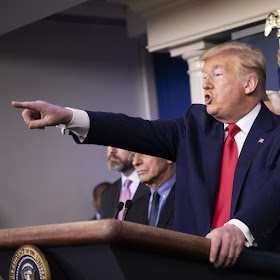 Late Wednesday, Secretary of State Mike Pompeo announced the expansion of President Trump's "Clean Network to Safeguard America’s Assets." This is an aggressive step of Chinese harassment of commercial operations beyond Trump's threatened ban of TikTok

The expansion is massive in scope.

This should simply be seen as Trump administration hate of China. As I stated at the time Trump announced consideration of the banning of TikTok, if Trump really was concerned about a threat to the privacy of Americans, he should look at the NSA.

I smell Trump's China-hating trade adviser, Peter Navarro, behind this.

The move comes at an unusual time given Trump is on the final leg of his re-election campaign. Global commerce is widely integrated at present and the major expansion of limitations on global commerce with China in the communicatiosn sector is sure to have repercussions in the US resulting in potential layoffs and shutdowns of firms that can be linked to the Clean Network effort.

As if Trump really needs more layoffs and shutdowns at this time. This won't me millions in layoffs but it will mean more layoffs, that is the economy being pushed in a bad direction.

Phone lines were no doubt burning last night between US-based Chinese executives and their bosses in the Middle Kingdom.

I'm told one firm has already issued a memo canceling all marketing efforts in the US immediately.

Meanwhile, Pompeo bragged in his statement that the harassment of China was becoming a global effort:

Momentum for the Clean Network program is growing. More than thirty countries and territories are now Clean Countries, and many of the world’s biggest telecommunications companies are Clean Telcos. All have committed to exclusively using trusted vendors in their Clean Networks.

And he called for even more nations to join:


The United States calls on our allies and partners in government and industry around the world to join the growing tide to secure our data from the CCP’s surveillance state and other malign entities. Building a Clean fortress around our citizens’ data will ensure all of our nations’ security.

What an ass. If this was about "national security," Pompeo wouldn't care at all as to what other countries were doing. This is a global strike against Chinese commerce.

Trump is moving us in the opposite direction.