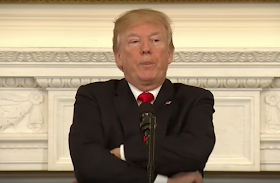 So much for lower drug prices.

The president is expected to sign the order, called “buy American,” during his trip to Ohio later Thursday, Navarro told reporters.

“If we’ve learned anything from the ‘China virus’ pandemic, it is that we are dangerously over-dependent on foreign nations for our essential medicines, for medical supplies like masks, gloves, goggles and medical equipment like ventilators,” the China-hate anti-free trade crony advance continues.

The order will require the government to develop a list of essential medicines and buy them as well as medical supplies from U.S. companies instead of from foreign countries like China, Navarro said.

This is crony protectionism of the highest order as Trump continues, step-by-step, to shut down free trade.

It is as if Trump, short of building Gulags, won't resist implementing any measure that won't lower the U.S. standard of living.

What an economic ignoramus.