What the Hell is President Trump Doing? 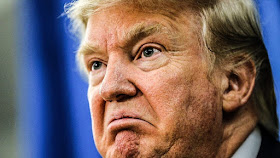 In a remarkable series of steps, President Trump has ratcheted up tensions with China. This is my fifth post in the last 10-days on actions taken by the Trump administration against Chinese commercial interests.

He is now targeting Chinese interests in America in the communications, mobile apps, cloud storage and pharmaceutical sectors, and questioning Chinese listings on American stock exchanges.

Trump last Friday said that he will ban the Chinese app TikTok from the United States. He has stated that if the app is sold to an American company that a fee would be levied on the sale.

He is justifying the aggressive stance on national security reasons.

As John Tamny writes;  How would "spying on young people and their dance moves...lead to useful information about the political establishment"?

Next, Secretary of State Mike Pompeo followed the Tik Tok statement with the announcement late Wednesday night of the formation of a "Clean Network to Safeguard America’s Assets" program.

This measure, you guessed it, is based on national security reasons. It calls for the removal of certain China-based telecommunications networks, mobile apps, pre-installed smartphone apps, and cloud based storage usage from operations in the U.S.

The statement went on to cheer the lead of other foreign countries which followed the lead of the U.S. Clean Network initiative.

I wrote when reporting on the Pompeo statement:


If this was about "national security," Pompeo wouldn't care at all as to what other countries were doing. This is a global strike against Chinese commerce.

He signed an executive order requiring the federal government to buy “essential” drugs from U.S. companies, the order is called the “Buy American” order.

The order will require the government to develop a list of essential medicines and buy them as well as medical supplies from U.S. companies instead of from foreign countries like China, Trump's China-hating trade adviser Peter Navarro told reporters.

And there is more.

"These recommendations are designed to address risks to investors in U.S. financial markets posed by the Chinese government’s failure to allow audit firms that are registered with the Public Company Accounting Oversight Board to comply with U.S. securities laws and investor protection requirements," the Treasury statement reads.

“The PWG examined the risks to investors posed by the Chinese government’s failure to allow access.  The PWG unanimously recommends that the Securities and Exchange Commission take steps to enhance the listing standards on U.S. exchanges for access to audit work papers, among other recommendations,” said Secretary Treasury Secretary Mnuchin, Chairman of the PWG.  “The recommendations outlined in the report will increase investor protection and level the playing field for all companies listed on U.S. exchanges.  The United States is the premier jurisdiction in the world for raising capital, and we will not compromise on the core principles that underpin investor confidence in our capital markets.”

The recommendation sets up for the delisting of some Chinese companies on American stock exchanges:


In particular, to address companies from jurisdictions, such as China, that do not provide the PCAOB with sufficient access to fulfill its statutory mandate (“Non-Cooperating Jurisdictions,” or “NCJs”), the PWG recommends enhanced listing standards on U.S. exchanges.  This would require, as a condition to initial and continued exchange listing, PCAOB access to work papers of the principal audit firm for the audit of the listed company.


In other words, via this recommendation, the PWG is advising that the Trump administration overrule listing and investing decisions of exchanges and individuals and make it more difficult for Chinese firms to maintain listings on US exchanges.

Bottom line, this multi-target assault on Chinese commercial activities within the United States is nationalistic cronyism at a remarkably intense level.

It is well appreciated by economists that free trade fosters peace and that anti-trade measures lead to tension between nations.

As the 19th-century economist Richard Cobden put it:


[We] advocated Free Trade, not merely on account of the material wealth which it would bring to the community, but for the far loftier motive of securing permanent peace between nations.

Trump's aggressive anti-trade actions against China are setting up to increase tensions against the Middle Kingdom. Perhaps only the patience of Chinese leaders, if there is such, will prevent things from spiraling completely out of hand.

We have a nationalistic economic ignoramus in the Oval Office being advised by the China-hating Peter Navarro.

In the end, it is clear they have no idea of the potential havoc they could wreak.

Just consider this MarketWatch report on Trump's order against WeChat:

That was the question on a lot of minds after Trump issued executive orders Thursday night banning “transactions” with the Chinese owners of the TikTok and WeChat apps starting Sept. 20. While the move against TikTok’s owner — Beijing-based Bytedance — was not a huge surprise, action against WeChat’s owner — Shenzhen-based tech giant Tencent Holdings Inc. — was.

Tencent also has significant stakes in Tesla Inc. and Snap Inc. , the maker of Snapchat, and the Chinese company has streaming deals in place with the NBA, the NFL and Major League Baseball. The order could potentially also affect Apple Inc. and Alphabet’s Google app stores, which feature Tencent-owned apps.

The executive order took aim directly at WeChat, which has more than 1 billion users worldwide, and whose “data collection threatens to allow the Chinese Communist Party access to Americans’ personal and proprietary information,” the order said.

But the wording of the order made it unclear if the ban affected just WeChat or all of Tencent’s holdings, saying: “any transaction that is related to WeChat by any person, or with respect to any property, subject to the jurisdiction of the United States, with Tencent Holdings Ltd. ... Shenzhen, China, or any subsidiary of that entity.”...

Either way, the order is likely to be challenged in court...

Banning all business by U.S. companies with WeChat’s parent — if that is the case — could prove to have much farther-reaching effects than Trump may have anticipated.