This is How Bad Currency Devaluations Can Really Get 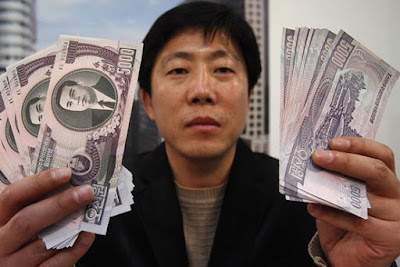 We are nowhere near the hyperinflation threat that some countries have experienced, but with Federal Reserve Chairman Jay Powell and the pumpettes increasing the money supply last year by 26%, they are clearly irresponsible.

At the post, Soaring Lumber Prices Add Nearly $36,000 To The Price Of A New Home, ucla_alum_88 left this comment:

Re how vicious currency devaluations can be for many people, I heard an interesting anecdote today in a podcast about a young man who escaped the horrors of North Korea. He described in excruciating detail the various ways that the communist regime savaged the common man/woman there.

Almost in passing, the young man mentioned "did you hear about the currency devaluation that occurred in North Korea in 2010." (It caused him to be homeless again.) He said that it, "killed thousands of people because the money that people had been saving became worthless."

He added, "a lot of our neighbors committed suicide. It was like one day they had something and another day they have nothing. And they have no hope of living."

Charles Ryu, Confessions of a North Korean Escape Artist, Episode 84 of the Jordan Harbinger podcast (at 52:00 of part 1).

That was an eye-opener for me as I've considered currency devaluations mostly as an ongoing economic matter to strategically protect myself ... but I hadn't stopped to consider just how horrible it can be for many people. Obviously, most US citizens haven't experienced hyper inflations ... but many foreigners know it all too well.

North Korea's surprise decision to redenominate its currency has prompted panic and despair among merchants left with piles of worthless notes, even driving one couple to suicide, activists said today.
North Korea informed citizens and foreign embassies on Monday that it would redenominate its national currency, the won, diplomats said. Residents in the reclusive communist state were told they have until Sunday to exchange a limited amount of old bills, they said.
The news sent Pyongyang residents rushing to the black market to convert hoarded bills into US dollars and Chinese yuan, South Korea's Yonhap news agency reported, citing unidentified North Korean traders operating in neighbouring China.
Shops, bathhouses, barber shops and restaurants have closed, activists said.
"We heard business and market activities were all suspended," said Lee Seung-yong, an official at Good Friends, a Seoul-based civic group that sends food and other aid to North Korea. "People have no money to engage in business."
Authorities have threatened "merciless punishment" for anyone violating currency exchange rules, Good Friends said.
The overhaul of the North Korean won – the most drastic in 50 years – aims to curb runaway inflation and clamp down on the street markets that have sprung up in the tightly controlled nation, analysts said.

Never trust governments. Always have some gold and silver coins tucked under your mattress.

Bitcoin and other cryptocurrencies won't help during a serious crisis. They are too trackable. It has to be gold and silver.